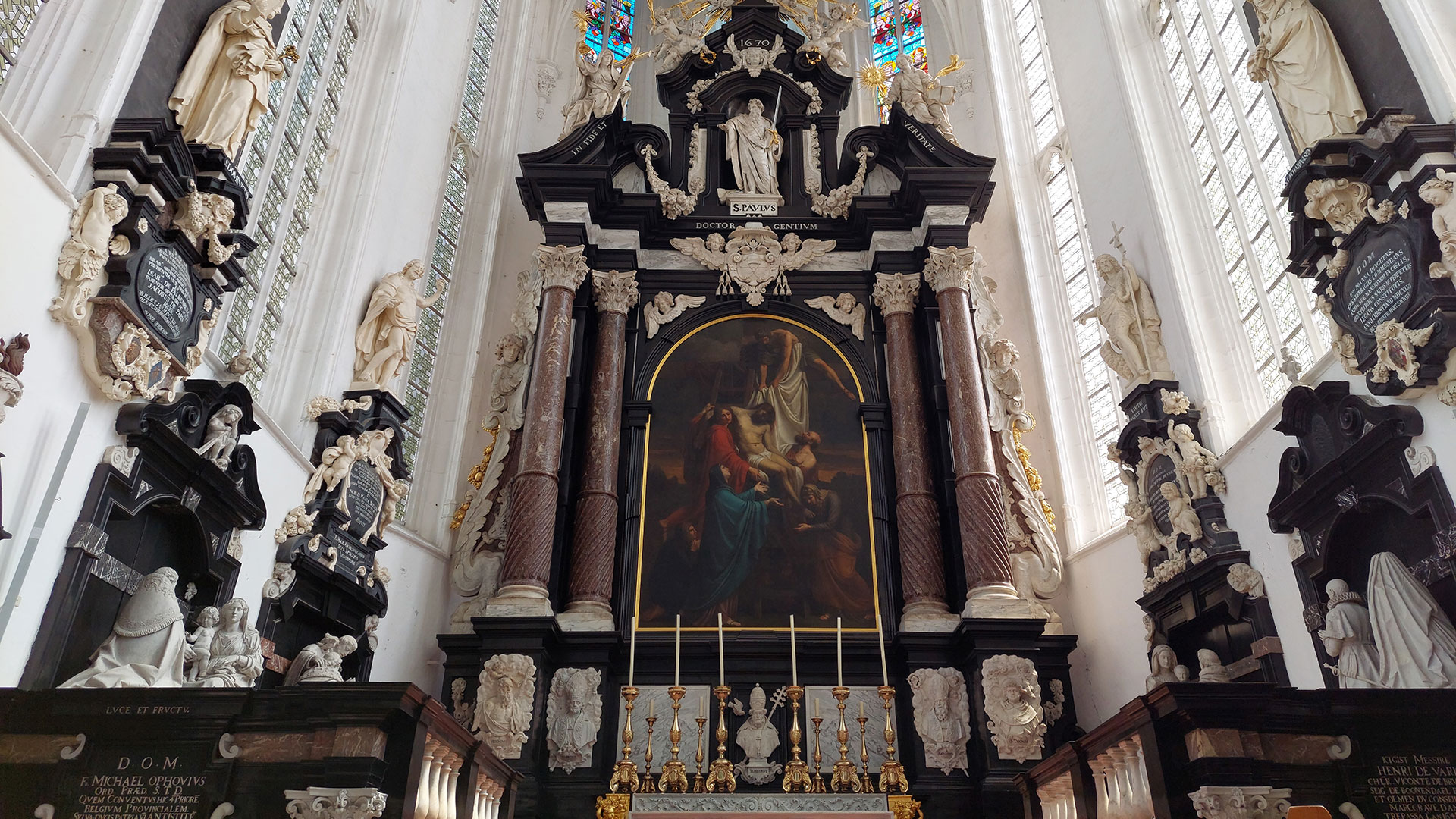 The eye catcher of the entire church, but originally only of the choir, is the triumphant high altar (1670), which closes off the apse like a gigantic screen. On the former high altar “Saint Dominic’s vision” by Rubens figured, which can be dated stylistically ca. 1618-1620. Dominic is said to have had a vision in which he saw himself and his friend Francis of Assisi protect the sinful world against the wrath of Jesus.

In line with the three worst sins man can be tempted by – pride, lust and greed – Jesus shoots as many lightnings. Upon this Mary tries to calm Him down. She proposes two loyal servants to Him, who can convert the world: Saint Dominic and Saint Francis. By this altarpiece the attention of the Dominicans in the choir stalls was permanently drawn to their mission: to follow the footsteps of the founder of their order by mediating the Saviour’s divine mercy for humanity. The Dominican and former prior Marius Ambrosius Capello, bishop of Antwerp, wanted to bequeath to his convent an unforgettable present: the marble portico altar, up high in the sanctuary. The then prime cost of 80,000 guilders is the equivalent of no less than 3.8 million Euros today. The colossus, designed by Ambrosius’ private chaplain Frans Van Sterbeeck, was executed by father and son Peter Verbruggen, and consecrated by the Maecenas-bishop in 1670.

Gigantic marble pillars, with a diameter of about 63.5 cm (= 2 ft) and a weight of about 4,500 kg carry an immense broken fronton with two curling shells

In the central niche Paul, the apostle, is honoured with his title ‘doctor gentium’, the teacher of the people. With a sword and a book in his hand he shows that he is prepared to die a martyr for the preaching of the word of God: Jesus’ gospel. The two open books by his side may refer to the books of the Old Testament, which he no longer regards as God’s final word, but only as a prelude to the New Testament. With an almost imploring gesture he looks at his audience sternly. Above the niche four small angels come flying in to offer him the attributes of divine reward for martyrdom: a laurel wreath and a palm. The motto of the Dominicans, which runs through on both curling shells – “IN FIDE ET VERITATE” (in faith and truth) – is impersonated above it by two personified virtues. First, on the left, Christian faith is shown, with the cross. This allegoric figure is holding the chalice with consecrated hosts in her other hand, which specifically refers to Catholic doctrine. On the right truth is symbolized by the one, universal sun, an open book of literacy and a triumphant palm. The cross that fits in an enormous, glorious halo and crowns it all, is the square cross of the Dominican order.

The white marble busts of the four Western Church Fathers enliven the black marble altar base, because they are symbolic of the theological brainwork that wants to connect faith with reason. From left to right: Jerome, the penitent, with the trumpet of the Last Judgment; Ambrose of Milan with the beehive of (honey-sweet) eloquence; in the centre pope Gregory with the allegorical dove of the Holy Spirit, which inspires at teaching; Augustine with the flaming heart. They share ‘the honour of the altars’ with Saint Thomas Aquinas, the famous Dominican theologian and ‘Doctor of the Church’ since 1567, on the extreme right.

The commissioner could not resist immortalizing himself in this monument, although in a relatively modest way. There are also a few biographical references of his, referring to his religious development: as a baptized Christian, as a religious with three vows, as an enthroned bishop. Stimulated by the example of the Jesuits nearby (the present Charles Borromeo’s Church), the Dominicans also provided their Baroque portico altar with a system that allowed them to change altarpieces, albeit with only two paintings. These were put at both sides of a long vertical axle, with their backs against each other.

Besides the Rubens mentioned The Martyrdom of St Paul by Theodoor Boeyermans (ca. 1670) could be admired. In 1794 both paintings were requisitioned by the French occupiers and transferred to Paris. In 1811 Napoleon gave them to regional museums in France. After the Battle of Waterloo this was a nice alibi for the French not to consider them as part of the collection of paintings the Louvre had to repatriate. This explains why Rubens’ Saint Dominic is now the eye-catcher of the Lyon Musée des Beaux Arts, and Boeyermans’ Saint Paul is in Aix-en-Provence, now restored in the Ste Marie Madeleine Church.

In substitution for these masterpieces Cornelis Cels painted The descent from the cross in 1807. Around 1670, for the second painting, The martyrdom of Saint Paul, Theodoor Boeyermans was completely inspired by Rubens, who had treated this theme for the Rood Klooster (Red cloister) near Brussels. Paul is kneeling on a hill, his eyes upward to Heaven, awaiting the fatal gash that will make his head roll. At Paul’s request Plautilla is coming to blindfold him, following the Legenda Aurea by Dominican De Voragine.

The spectators on the hill flank, soldiers and Christians, help to constitute the diagonal (upward) axle leading to the spot of the execution. Angels already bring the laurel wreath and the palm of Paul’s Heavenly victory.

In the 17th century stained-glass artist Abraham Van Diepenbeeck got the commission to represent the story of patron saint Paul in the ten windows at either sides of the choir.

The four stained-glass windows we can now see behind the high altar (H. Leenen, 1967) are a reminder of saints that were popular in the former parish church, Saint Walpurgis: Saint Eloy, Saint Catherine of Alexandria, Saint Amandus and Saint Walpurgis.