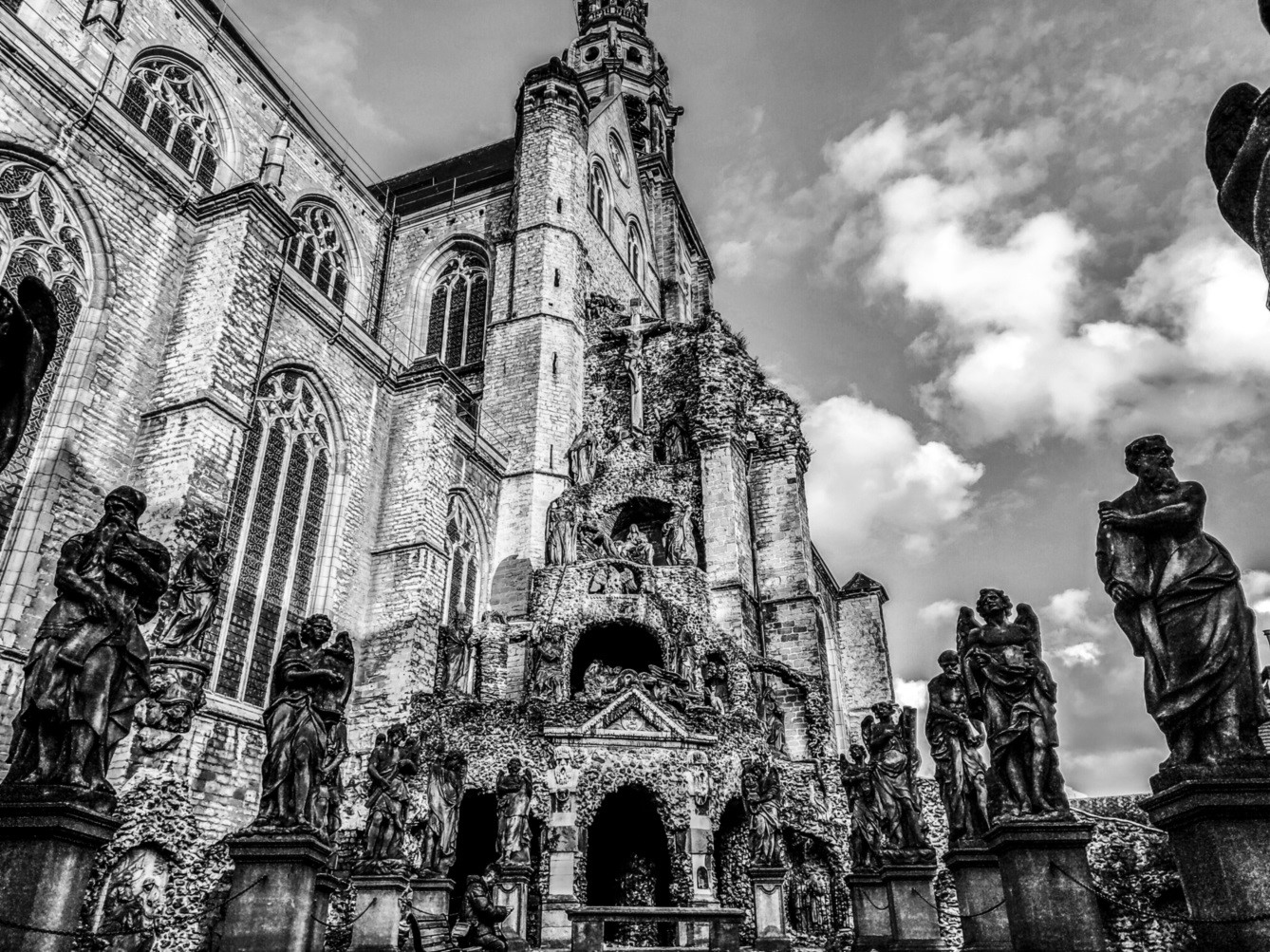 The Dominicans and the pilgrimage to Jerusalem

For many a Christian the pilgrimage to the Holy Land is a goal in life. In 17th century Antwerp the Dominicans took the lead in the promotion of this pilgrimage. Within the Brotherhood of the Rosary they founded the Fellowship of Palmers. The last ones to visit the Holy Land at the end of that century were the two Ketwigh brothers, both Antwerp Dominicans. Because the Holy Land had become inaccessible due to the advancing Ottoman troops Dominicus (Domien) van Ketwigh conceived the plan to convert the graveyard next to the church into a contemplative statue garden evoking Jerusalem. The burial function of the churchyard was to be preserved. So this Baroque creation was meant to be a kind of spiritual ersatz good. By seeing Jesus’ suffering, death and resurrection impersonated life size, the spectator can call these mysteries of faith to mind more vigorously and experience them more deeply.

Already before 1699 Willem I Kerricx drew the first design for the ‘hill’, but it took nearly half a century to have the entire project realized. For this cause until 1741 an appeal was made to several Antwerp Baroque sculptors including Jan Claudius De Cock, Willem I Kerricx and Willem-Ignatius Kerricx, Jan Pieter I van Baurscheit, Michiel I van der Voort and Alexander Van Papenhoven.

Although the dominant Calvary lends its name to the entire garden of the former graveyard, it is in fact also a garden of resurrection, as Jesus’ rising from the dead is brought into vision ‘live’ by His encounter with Mary Magdalene in the garden! Moreover the prophets foretell Jesus’ suffering as well as His resurrection. Whoever was involved in Jesus’ sacrifice of love by His crucifixion and His triumph over death, either as a direct witness, a prophet or as a worshipped pious person, has been given a place here.

By the thematic positioning of the statues and by the lively dialogue of some groups of statues this remarkable ensemble looks somewhat like an open air theatre. Four Dominicans, who were palmers themselves, carrying rosaries, accompany the visitors. To illustrate the destination of their fellowship, they hold shields with on them the Christian escutcheon of Jerusalem, while palms refer to the pilgrims’ custom of entering their hometowns triumphantly with this ‘piece of evidence’.

At the beginning of the path two beatified Dominicans invite the visitor to join them on their journey by means of the texts on the rim of their shields. On the left there is Jordan of Saxony (D1), who succeeded Dominicus to be the second magister-general of the order. In 1237 however he was killed in a shipwreck when coming back from the Holy Land. He recommends the visit with a verse from the psalms: “AENBIDT OP SYNEN HYLIGHEN BERGH. Ps: 98.” [Worship on His Holy Mountain] (Ps. 99:9). To the right there is the Portuguese Gondisalvus of Amarante (1187-1259) (D2), who, after a stay in Palestine for over ten years, became a hermit and afterwards a Dominican. On Gundisalvus’ shield there is: “SYN GRAF SAL GLORIEUS WESEN ISA : II” [His tomb shall be glorious] (Isaiah 11:10).

On top of the hill, on the terrace underneath the cross, two fathers are preaching. They are the co-founders of the fellowship of the palmers: Domien Vanden Boom (D3), on the left, and the crippled Jaak Pussens (D4) on the right.

Floorplan of the calvary garden The Passion of Christ To testify to Jesus’ gruesome passion angels at both sides of the path show the visitor the tools of the passion. The positioning of these heavenly ‘squires’ was inspired by Bernini’s Ponte Sant’Angelo (1669), which Dominicus van Ketwigh admired during his stay in Rome from 1714 till 1716. The tools have been distributed as follows: crown of thorns (E1), (cloth with) the 5 wounds (E2), the inscription INRI on the cross and a sponge (E3), the seamless robe (which was diced for) and the dice (E4), the cross (E5), the ladder (E6), the shroud (E7), the scourge and the ropes (E8), the (alleged) cloth of Veronica (E9), whipping post and the crown of thorns, glove, nails, scourge and dice (E10). The angels show their grief: they look sad and some are weeping.

Jesus’ suffering is also depicted in the 4 medallions (Willem Ignatius Kerricx, 1741) against the church wall. Together with the calvary they constitute the 5 Sorrowful Mysteries of the Rosary. The remarkable idiosyncrasy that Mary is present in every scene should not surprise us too much since both the commissioner and his brother Jan Baptist had been great promoters of the daily devotion of the rosary since 1703. Each mystery is accompanied by a poem.

Text and photographs on this page have been copied from the website of Toerisme Pastoraal Antwerp: www.topa.be – where you could check the full version. We have added some remarks and relevant photographs.

We thank E.H. Mannaerts and his enthousiast team for the authorization to make use of text and photographs in this website.