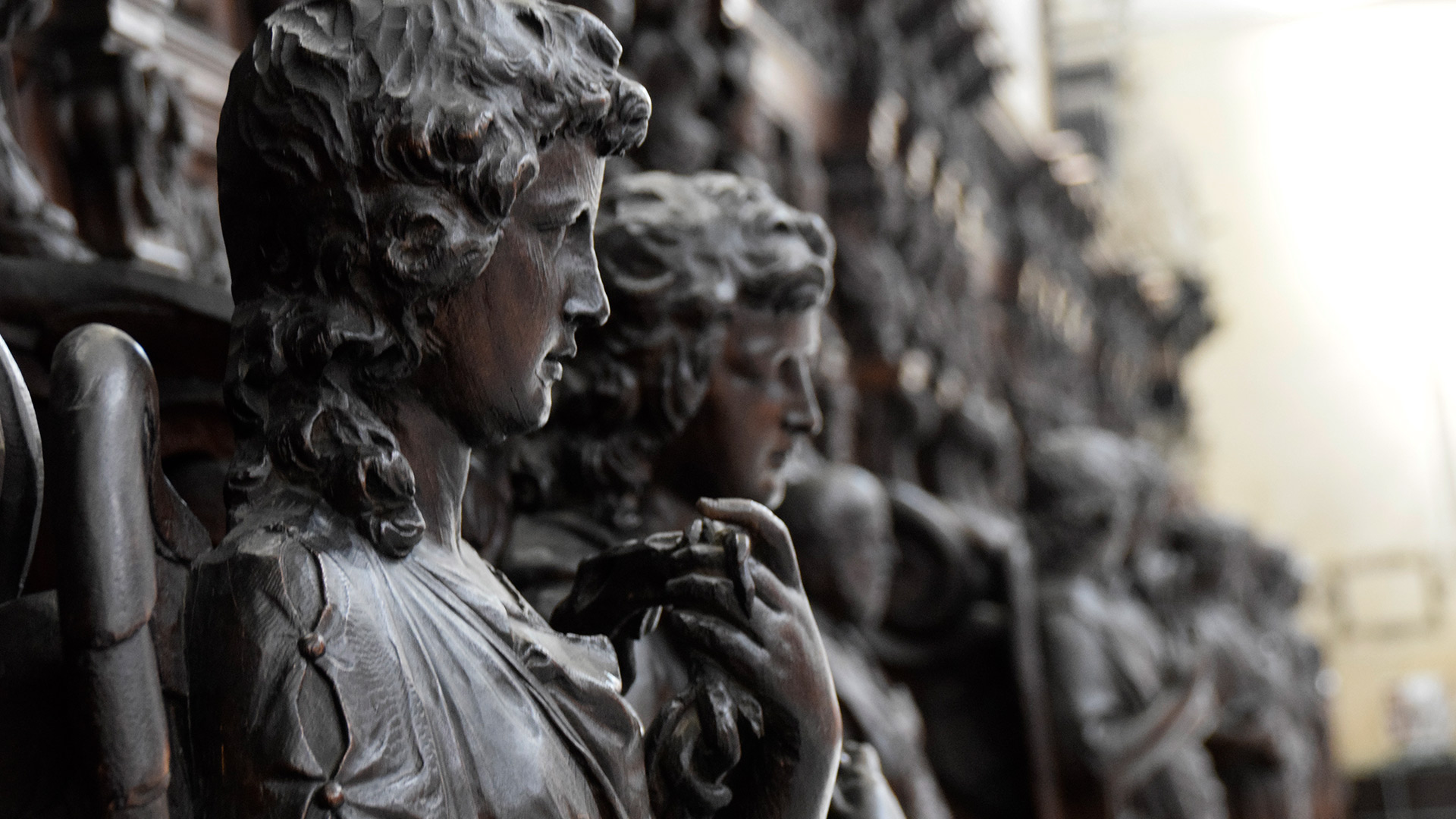 In the duchy of Brabant, to which Antwerp belonged, the international Gothic style, developed into a specific regional variant, especially in church building. The characteristics of this Brabant Gothic style, applied to Saint Paul’s, are:

For the interior walls brick was used, whereas the exterior paraments and constructive parts have been made of sandstone (“Ledische zandsteen”). With some spatial symbolism

Now the floor level of the church is about 1.7m (= 5.5ft) above street level. The steps in Nosestraat make one experience the figurative ‘elevation’ of the sacred space, reminding us of the psalm-verse “Let us go up to the House of the Lord” (Ps. 122:1) Here you are assimilated into Beauty, which exceeds temporality. After all the church is not a common space for religious services, but wants to evoke ‘Heavenly Jerusalem’. The consecrated church first of all is meant to be the house of God, where one may be a guest, especially at the altar, and where one lets himself being filled with the Light of God’s presence. Here one enters into a different dimension of life, which refers to the Perfect and the Eternal. The sacred space makes it possible to experience God’s presence thanks to the following characteristics:

The height, which is 24.9m (81ft 6in) in the choir and 26m (85ft 3in) in the stellar vault, combined with the depth (of 88m = 289ft), which is so extraordinary thanks to the long choir, determines the grandeur. It is a pity that the coloured light of the stained glass windows, which marked the space even more, has disappeared. The special effect must have been even bigger for those who, in former days, lived in a small house such as the ones at the foot of the façade (p. 17). Symbolically this religious idea of God’s eternity (‘transcendence’) is supported by the golden stars, which represent the firmament of Heaven. In the same way as we cannot grasp the stars with our hands, we cannot grasp God with our brain. However much God transcends our limited intellectual capacity was depicted in a 15th century painting on a side altar. In it we see Saint Augustine on the beach, meeting a little boy who tries in vain to pour the water of the entire sea into a little pit. The saint, who questions the seriousness of this attempt, receives the reply that his attempt to understand the full mystery of God is even less realistic.

With the Apostles as symbolic pillars

The symbolism of the twelve apostles is present in the very architecture of the church building, more specifically in the twelve pillars bearing the central nave. In his Epistle to the Galatians (2:9) Paul calls the apostles “the pillars” of the Church. In Revelations (21:14), where the wall of Heavenly Jerusalem is supported by twelve pillars with in between the names of ‘the Twelve’, the architectural symbolism is even more explicit.

At the top of each pillar there is a more than life-size white stone apostle statue (2.25m = 7ft 4in tall), sculpted by Michiel I van der Voort. Preliminary studies of these are kept in the Antwerp Print Room; one bozzetto, that of Andrew, is in Brussels (KMSKB).

So as to be able to realize the series of statues financially, each apostle statue became part of a funeral monument of a single wealthy citizen, with the huge plinth carrying the text of their epitaph. All persons who continue ‘living’ here in memory belonged to the same Emtinck family of substance. The order of the names of the family members is chronological according to the date of their death. The series starts with Peter, and Eduard I († 1620), the Antwerp primogenitor. Eduard III († 1724), lawyer and almoner, as mentioned in his epitaph below the apostle John, seems to have been the most central character of the twelve family members mentioned. He is the father of the six children whose names were written underneath the last six apostle statues – sometimes even decades – after the series had been realized. Moreover his date of death matches best the stylistic dating between 1700 and 1720.