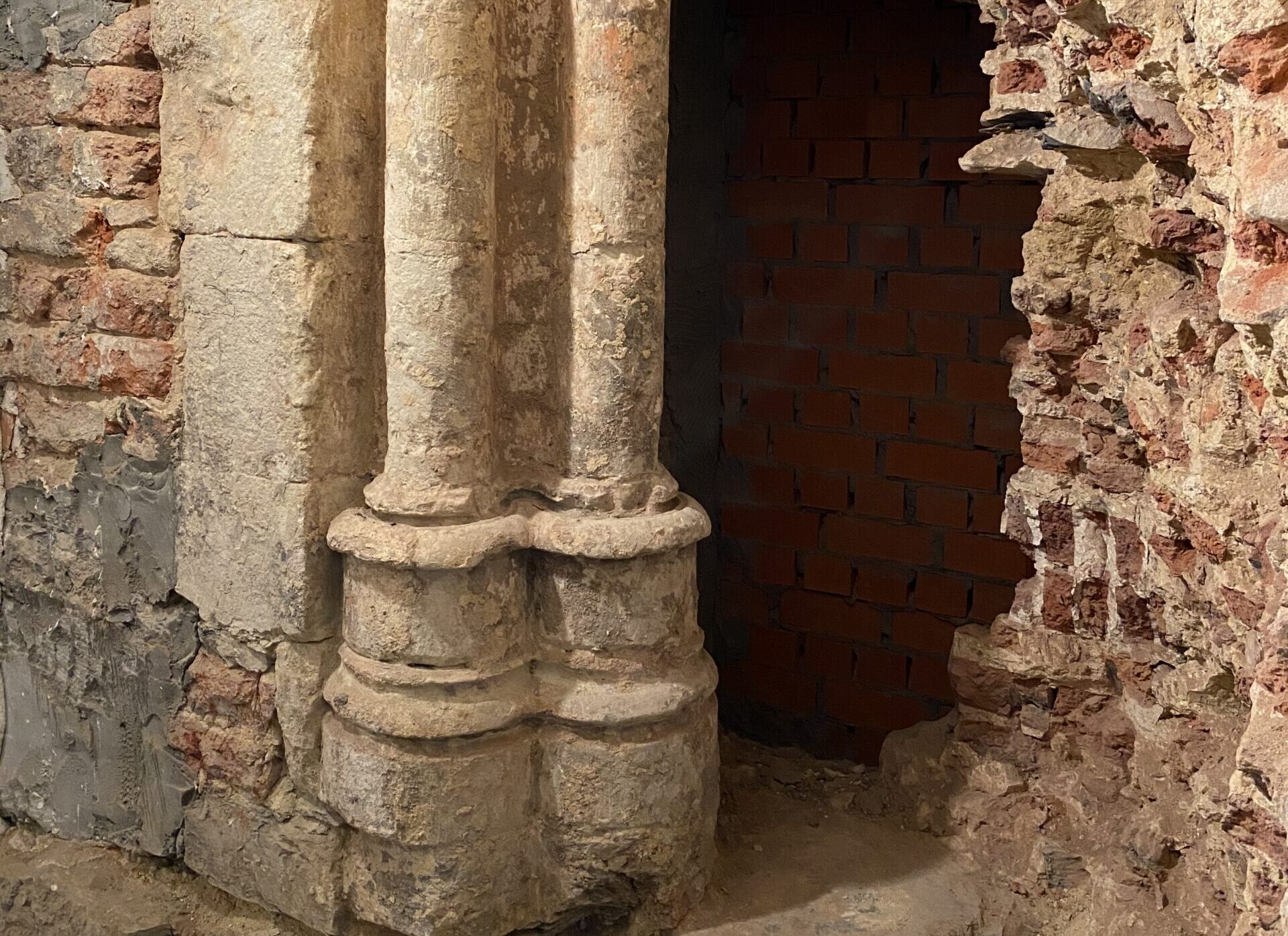 A crypt under the choir

What we today call ‘the crypt’ is not strictly speaking a crypt.

After all, no relics of a saint are kept. This space of about 10 meters wide and 30 meters long is a cemetery for 17th-century notables. Through a door to the right of the stairs to the main altar one descends to the crypt.

Later this could also be done directly via the garden behind the Sint-Paulusstraat. At the beginning of the last century, a wine merchant rented the crypt for storing his wine barrels. The fractures in various tombstones are still silent witnesses of the rolling of these wooden wine barrels across the floor.

During the restoration campaigns after the fire of 1968, the floors in the nave and choir were opened up for the installation of the underfloor heating and the ventilation ducts.

This was the moment for archaeological excavations to the 13th-century church and monastery. There was always the suspicion that it would be right under the current, Gothic church.

Wells were dug in the southwest corner and along the north wall of the crypt. As expected, they stumbled upon well-preserved foundation remains of the choir of the first church: a northern buttress and the northern and southern choir wall of the eight-meter-wide choir in Tournai limestone. In some places, the wallwork up to three meters was also well preserved, sometimes still with the original plaster. Given the large height difference of four meters between the floor of the 13th-century church and that of the current church, the old church did not have to be completely demolished.

Over the years, the crypt fell into disuse and only functioned as a storage place for coal and chairs. Some photographs from 1980 show the crypt in a deplorable state.

In 2006, after the restoration work in the church, the ‘friends of Saint Paul’ found the financial means to restore the crypt: new lighting, toilets, a kitchen in the adjacent new building, painting and plastering….

After all, the Saint Paul community needed a space for lectures, meetings, receptions after orchestral masses, etc. And the archaeological wells containing the remains of the old church were given a place in the public access to the crypt.

2021: opening up the archaeological site

Through intensive use, the crypt deserved a thorough refurbishing.

In addition to a new lighting, a new kitchen and repainting, the focus this time was on optimizing accessibility and the indoor climate. For example, the slope at the entrance was made wheelchair-friendly and the broken terracotta tiles around the tombstones were replaced.

Opening an old window opening and blowing fresh air in through a new passage at the end of the crypt provides a better indoor climate.
Perhaps the most radical change in the crypt is the new passageway.

Through an iron fence by artist Bruno Kristo one now literally enters the 13th-century church and its monastery.

These parts under the current altar of celebration, southern transept and the sacristy were already uncovered during the archaeological excavations of 1990 but are now made accessible to the public. Discover both walls of the first high choir of 750 years old! Through a first portal you enter the 13th-century monastery. This portal in brick masonry, plastered and painted in wide bands white and black (imitation natural stone) and red brick painting is unique. Such monumental architectural painting, probably dating from the end of the 14th or the beginning of the 15th century, is extremely rare in Flanders and does not occur anywhere else in Antwerp.

Just before the entrance to the 13th-century chapter house, we see the impressive fragments of the monumental monastery gate from the same period. Slender columns are supported by natural stone blocks. Nearby we find the oldest bricks in Antwerp: large stones of up to 30 cm long in a wall fragment from around 1320.

You are probably eager to visit this literally hidden history. You can: go to ‘practical information’ for individual visits or to ‘guided tours’ if you want to visit the underground of Saint Paul with a group.