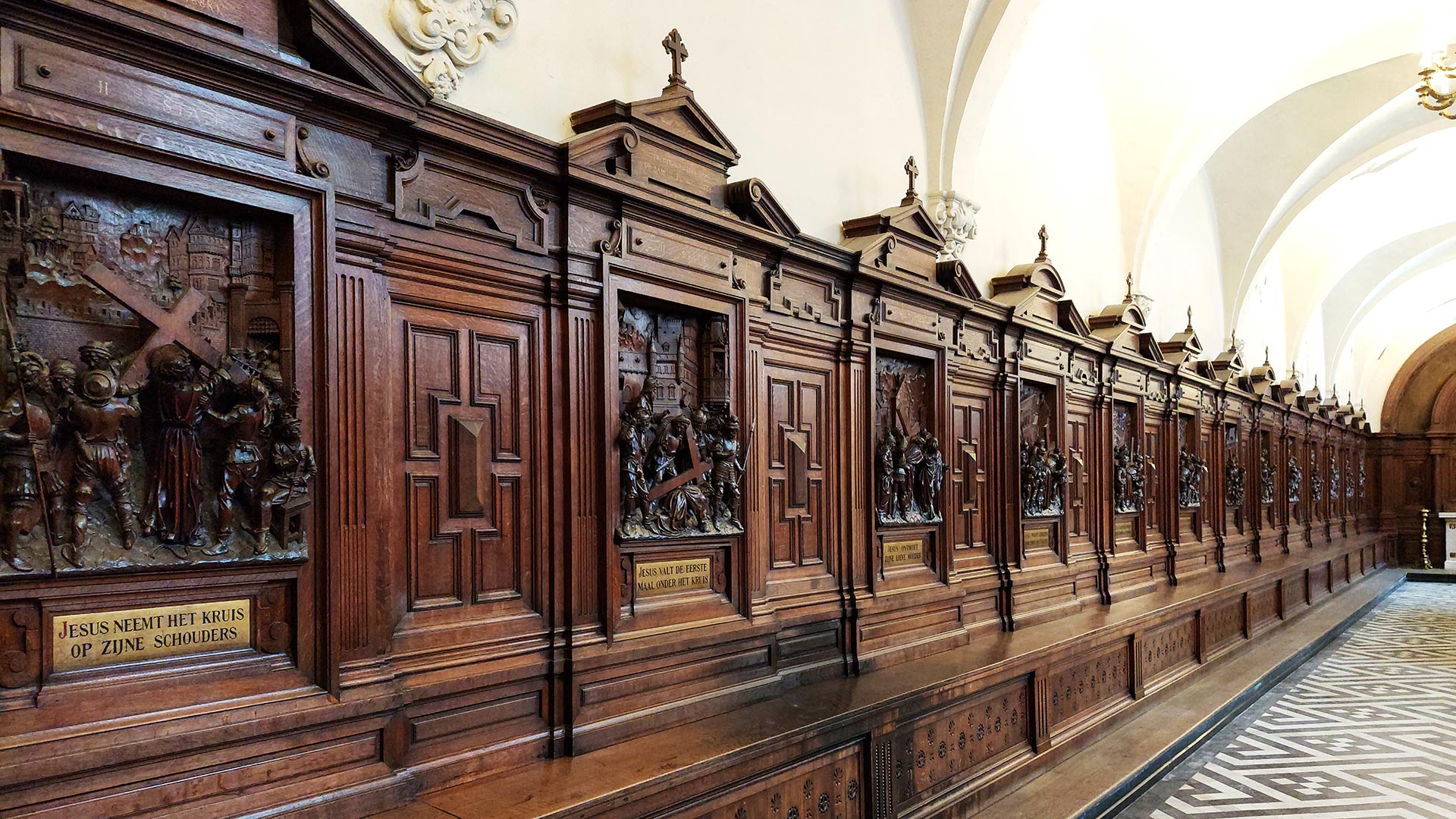 Way of the Cross chapel

Way of the Cross chapel

The Holy Cross Chapel and the Stations of the Cross

For the new devotion of the Stations of the Cross there was no place in the overfull Saint Paul’s church, but they have found their place in the cloister corridor nearby, which has been furnished as a chapel.

Above the entrance you can read “Wees gegroet // o Kruis // mijne eenige hoop!” [Hail to you // oh Cross // my only hope!] and when leaving the chapel: “Ontferm // onze Heer // Ontferm U onzer.” [Have mercy // our Lord // have mercy upon us]: the prayer with which the people used to confirm their devotion at each new station of the Cross. The 14 stations of the Cross are typically neo-Gothic work by the Antwerp sulptors Jean-Baptist de Boeck and Jean-Baptist van Wint (1888-1889).

Typical of neo-Gothic historicism is the preference for evoking 16th century life in the Low Countries, with 16th century clothing and weapons. The buildings in town carry both Gothic and Renaissance motifs. The city landscape gradually evolves from Pilate’s palace, along the streets of Jerusalem to Golgotha and finally to the rock-cut tomb in the neighbourhood. In the city of Jerusalem there are Italian Renaissance palazzos and Flemish Gothic houses and brick towers. Often small figures watch the main event far off from a height, from balconies or from windows. So as to free the relief from its confinement inside the case and the frame, the sculptors have often allowed a three dimensional figure to step out of the scene as it were. Notice how in the sixth station, the one with Veronica, the artist must have had the religious statues in Antwerp streets in mind, when on a street corner he added this image of a satyr to evoke paganism.

A team of Saint-Paul’s discovered in 2017, after a long search, the De Boeck & Van Wint have made a similar way of the cross for the Holy Angels church at Hoar Cross in the English Midlands. A mutual and ecumenical project between the churches resulted in lectures, exhibitions and a bilingual brochure. The project is awarded a laureate prize by the province of Antwerp in 2020. On the half circular arch above the altar niche there is the text that is prayed out loud by the people during the Stations of the Cross after each mentioning of a station: “Wij aanbidden u Christus en loven u omdat / Gij door uw kruis de wereld verlost hebt.” [“We pray to You, Christ and praise You because / by your cross You have delivered the world.”]

The marble antependium contains the names of the parishioners who, due to their resistance against the enemy, lost their lives in the First World War (1914-1948). Soldiers who fell in battle are commemorated as well as resistance fighters who “were shot a bullet through the head” (i.e. were executed).

Text and photographs on this page have been copied from the website of Toerisme Pastoraal Antwerp: www.topa.be – where you could check the full version. We have added some remarks and relevant photographs.

We thank E.H. Mannaerts and his enthousiast team for the authorization to make use of text and photographs in this website.