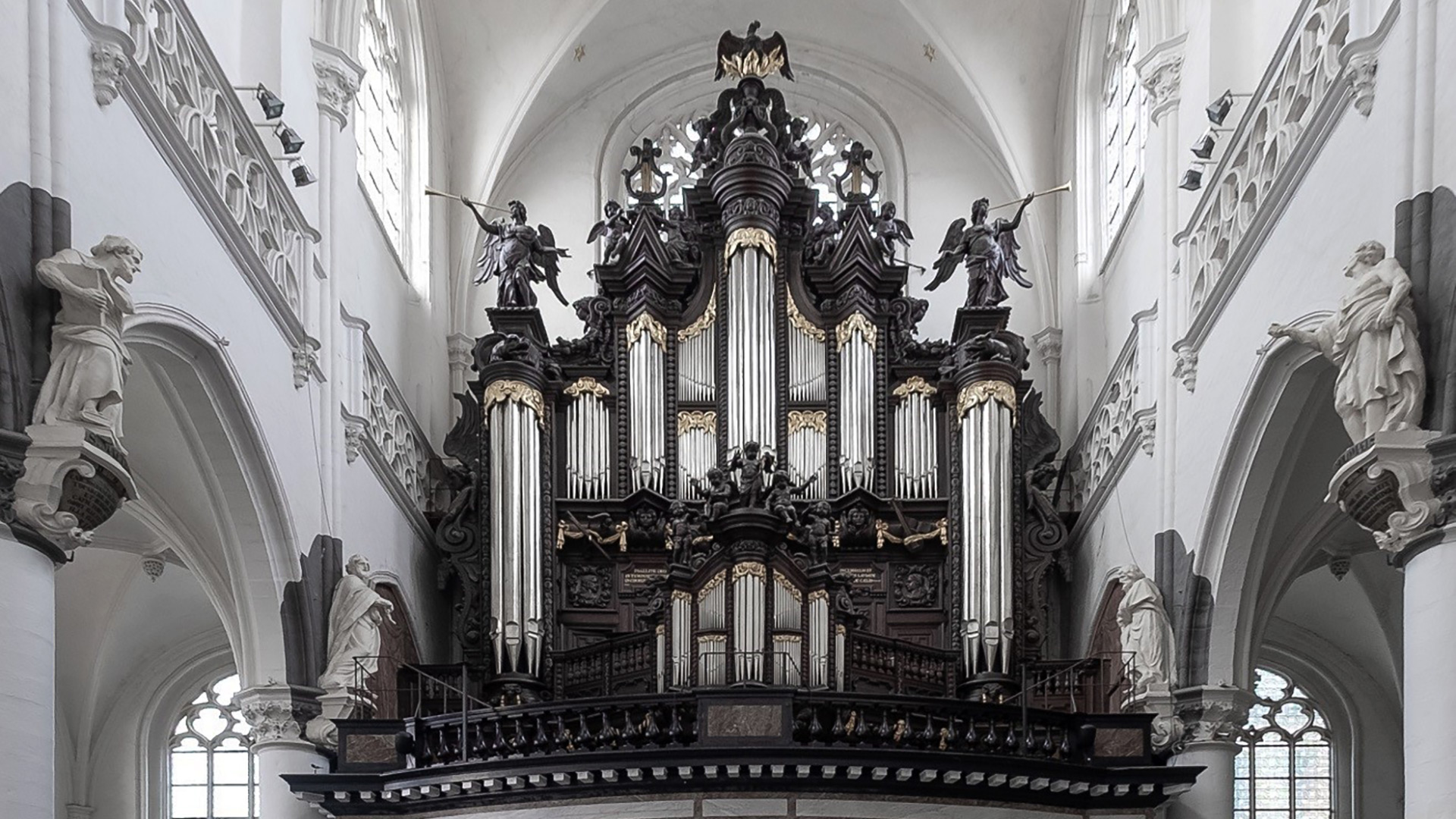 A Church community can enjoy faith far more when they can pray singing. Song and music are supported by the pre-eminent church instrument: the organ. The impressive organ may be considered the most important big historic organ in the Southern Low Countries. The core of the organ was built before 1654-1658 by Nicolaes Van (der) Haegen. With its three manuals, a pedal board, seventy-four registers and 3,303 pipes it is an exceptionally big instrument for that time. Very soon it enjoyed great fame, which shows for example from the ample ode on the first occasion it was played, and from the concert by the Brussels court organist Abraham Van de Kerckhoven at the visit of queen Christina of Sweden in 1658.

In 1661 the organ with its quite unique two pedal towers was taken as an example for the new organ in the protestant Grote Kerk of Dordrecht. But how long does the mirth of the world endure? At the 1679 fire the vaulting collapsed and severely damaged the organ. The thorough restoration that followed has been symbolised as a regeneration with the Phoenix rising from the fire in the top. The monumental organ case was carved by Peter I Verbruggen in 1654-1658 (or after 1679) after a design of Erasmus II Quellinus. This duo was commissioned to realise the great organ case in Our Lady’s Cathedral in 1664.

The main part is the central part of the upper case. The positive organ, which is a scaled down replica of this, is in the balustrade of the original rood loft.
Jean-Baptist Forceville, who had received the commission for a choir organ on the choir screen some ten years before, renovated and enlarged the great organ in 1730-1732. In the nineteenth century the instrument was transformed and modernized once again, first by Jean-Joseph Delhaye in 1824, and in 1843 by François Loret. In spite of the different phases of construction the instrument is one great unit that fits harmonically against the entire west wall. At the occasion of the restoration of the great organ in 1992-1996 it was decided to have a second, smaller organ, incorporated into the lower level of the existing instrument, to accompany a choir and orchestra at ‘contemporary’ music performances. It has two manuals, one pedal board, sixteen registers and 926 pipes. Together the two organs number 4,229 pipes.

True to tradition angels making music are to be found on top of the central part, the pedal towers and the choir organ. The two sharp frontons are crowned by a lyre and flanked by little angels: on the left one blows the trump, on the right the left one plays a violin or viol, while the right one sings from a book.

Two large seraphs, standing on a dangerous, but apparently tamed dragon, triumphantly blow the trump for the glory of God: “Praise God!”, as it is sung in the psalms. Te Deum laudamus (You, God, we praise) is the habitual song of praise at each victory. In its combination with the Phoenix some regard this as Resurrection, the triumph of faith, the glory of God or the Last Judgment. In the bottom zone there are some musical instruments as trophies. On the left a kind of bassoon and a portable harp (with an angel’s head), a violin, a flute and an open book. Further, on the right, there is a drum, a flute and a tambourine, a mandolin and an open book. At the bottom each pedal tower is framed by three, and the choir organ by two ram’s heads (notice the goatee and the bent horns). Festoons and garlands (of fruit) frame different sections of the organ case horizontally and vertically. Here and there they are brightened up with masks.
On the choir organ we can see a choir of five little angels, sitting or standing, singing. The first one from the left is holding a baton and the second and third ones from the left hymnbooks.
The two inscriptions from the psalms at the bottom of the great organ case inspire to joyful songs and music for the Lord.

In 1955 Father Dockx started the tradition of orchestra masses, which soon became renowned in Antwerp and beyond.