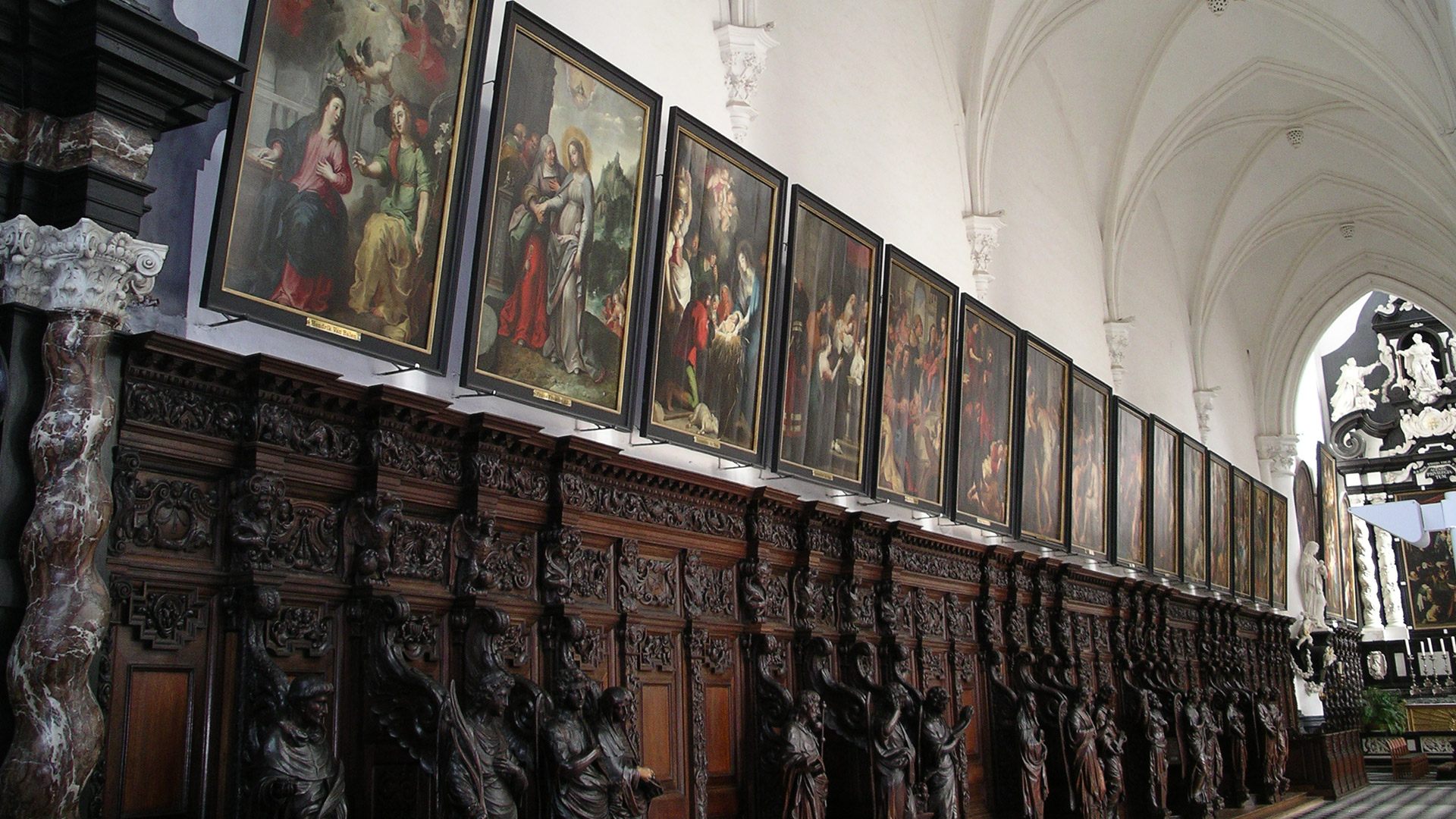 Holy Mary of the Rosary

Holy Mary of the Rosary

For over 440 years the Confraternity of Our Lady of the Holy Rosary has been an established institution at Saint Paul’s Antwerp.

Within this Confraternity, the ministering masters form the “Chapel of Our Lady of the Holy Rosary” aim to maintain and promote the devotion to Our Lady, assist in the church services and cooperate in all kinds of religious projects. The members wear a long black robe with blue-rimmed epitoga.

These tabards and reserved places in the church, are privileges which enable us to manifest ourselves as a group witness. It is neither an honorary function nor a purely ceremonial or symbolic matter. It is a serving task where all members, within the limits of their own capacities, dedicate themselves to the Confraternity, the Chapel and the parish of Saint-Paul’s.

A piece of history Despite the fact that Our Lady’s patronage had a rather late start in our regions, the patroness of Antwerp has traditionally held a special place here. It must be reckoned that the actual Mary devotion in Antwerp only began to flourish in the thirteenth century. It would take until 1348 before the first Brotherhood of Our Lady was founded. Such a brotherhood was an expression of the ordinary people’s devotion.

The practice of praying the Rosary flourished in the fifteenth century, an era of extraordinary Marian worship. This custom, which had existed for some time, was activated and promoted by the Blackfriars or Dominicans. It remains unclear who was the founder of the Brotherhood of the Rosary at Antwerp. The first official and umbrella brotherhood is that of Cologne, founded by the influential inquisitor Jacobus Sprenger on September 8th, 1475. On Sunday, October 7th, 1571, in the Gulf of Corinth near Lepanto (now the city of Nafpaktos), a clash between the fleet of the “Holy League” led by Don Juan of Austria and the Turkish fleet commanded by Ali Pacha took place. Notwithstanding a numerical majority, the Islamic fleet was defeated by that of the Holy League. During the fight, the Dominican Pope Pius V prayed to Our Lady to implore victory.

In gratitude for this victory, a “Brotherhood of Our Lady of the Holy Rosary” was founded in Saint-Paul’s church in Antwerp. Our Brotherhood was thus founded shortly after the iconoclasm of 1566 in a period when the Calvinists opposed the devotion to Mary. This iconoclastic conflict ensured that Catholics profiled themselves even more and founded new Our Lady Brotherhoods.

Here we try to explain names such as ‘Confraternity of Our Lady of the Holy Rosary’, ‘chapel lord’ and ‘serving master’. These terms are not easy to explain. Who are those men and women in their long black coats and how did all this come about?

HThe word ‘chapel’ derives from the Latin cappa = mantle, diminutive capella. It refers to the mantle of Saint Martin (Martinus), Bishop of Tours (° Savaria-Hungary 316 – † Candes-France, November 8, 397, feast day November 11). Saint Martin gave away his half cloak to a beggar. The reason that Saint Martin only donated half a cloak is that a Roman officer had to pay for half of the mantle, the other half was paid by the emperor. The mantle of Saint Martin became a relic and the place where this mantle was kept was called ‘capella’ or chapel.

From reliquary, chapel became a name for a place of worship. Chapels were often built in places where a miracle had happened. In later times many of those chapels grew into churches. Many chapels can still be found at a crossroads.

Meanings of the word ‘chapel’: At Saint-Paul’s, a Chapel is a group of persons who, within a Brotherhood, exercise a managerial and / or serving role. A Confraternity is a lay association with a religious purpose, such as the practice of works of piety and charity. The first Confraternity of Our Lady was founded in Antwerp in 1348.

Such a fraternity was an expression of the common man’s devotion. The first was named in 1275 and was founded in Antwerp by Canon Jan van Beveren. Everyone could participate in a fraternity of Our Lady, for a small fee, in contrast to the chaplains, who reflected the devotion of the upper bourgeoisie and who required a relatively large amount of capital to become and remain a member. ‘Kapelheer’ is an unusual word. It is a typical Antwerp phenomenon. Outside the city it hardly exists. In Google ‘kapelheer’ gives 401 results (2021). The results mainly quote the story of the bleeding host, activities in Saint-Paul’s and Saint-George’s parish, the appointment of a new chapel in the Frisian church in Rome and genealogical data of people who have been chapel lords at Antwerp.

‘Kapelheer’ (chapel master in the past) is a translation of the Latin cappellanus, which can also be translated as chaplain. The Dutch term chaplain for the position of the Flemish curate has been used since Napoleonic times (1799-1815). Before that time, a chaplain (or rector) was a priest attached to a chapel. With this last fact we get closer to the actual meaning.

In the Middle Ages, brotherhoods, but also some guilds, often had their own altar, whether or not in a chapel building. It was served by a clergyman: a chaplain. There was a chapel lord for secular affairs. It was a lay person in charge of the financial and material management of the Brotherhood. He was also called an altar master, in particular if only the operation of an altar was concerned. They were reputable people of the city: craftsmen and merchants, aldermen, mayors and nobles. From the old membership book:

Using the words serving and master together is not a contradiction. Master means “being more”, “being more special”, “being more distinguished”, “having more prestige”, “being more intelligent.” This is in contrast to the word serving. But master is also a title for a person who has some degree of knowledge or official capacity. In this sense, serving master is a description that applies to what a chapel lord should be today; to use his or her master capacities to help others, to serve as a ‘primus inter pares, a first among equals’.

The washing of the feet in the New Testament is a good example of this. Jesus washes the feet of his disciples. He identifies himself with the very least of all, acts like a slave. Jesus shows, with this symbolic act, to his disciples and to us that service to each other and mutual solidarity, is one of the centers of faith. The point is that also the Son of God came to serve.

A bit of history In August 1399, the first official urban procession of Mary took place. In a short time it would eclipse the other two processions, namely that of the Holy Circumcision (probably established between 1270 and 1324) and of the Blessed Sacrament. Saint-Paul’s parish traditionally holds its procession on the first or second weekend of October.

Despite an age-old tradition, the concept of our procession has regularly been changed to meet the needs and desires of clergy and believers. The whole event must remain meaningful without falling into a folkloric procession. In 1962 the form was changed and the procession for blessing the river Scheldt was created. That concept still exists today.

Devotion, gratitude, belief, testimony and mission are some of the thoughts that form the basis of a procession, both now and 600 years ago. The same values ​​ensure that an event like this is still meaningful in these modern times. It is maybe surprising that the Scheldt forms the central pivot in this witnessing procession. But isn’t it true that we should be grateful for this source of Antwerp’s prosperity? Along this river, our city and our regions have been Christianized from 640 onwards. Many missionaries have been here, people who gave their lives, not only to proclaim the Christian faith but also to assist the poor and oppressed.

But Antwerp is also a city that currently itself needs evangelism, missionary work. People who have become estranged from their faith over the years, or who have never wanted, dared or could take the step to church, should be inspired by the devotion and testimony of the participants in this procession to God’s love. This message is symbolized in the procession by the monstrance with the Blessed Sacrament. This spiritual treasure with its great spiritual richness is, in all its outward simplicity, enclosed in a profane artifact of gold, silver and precious stones. 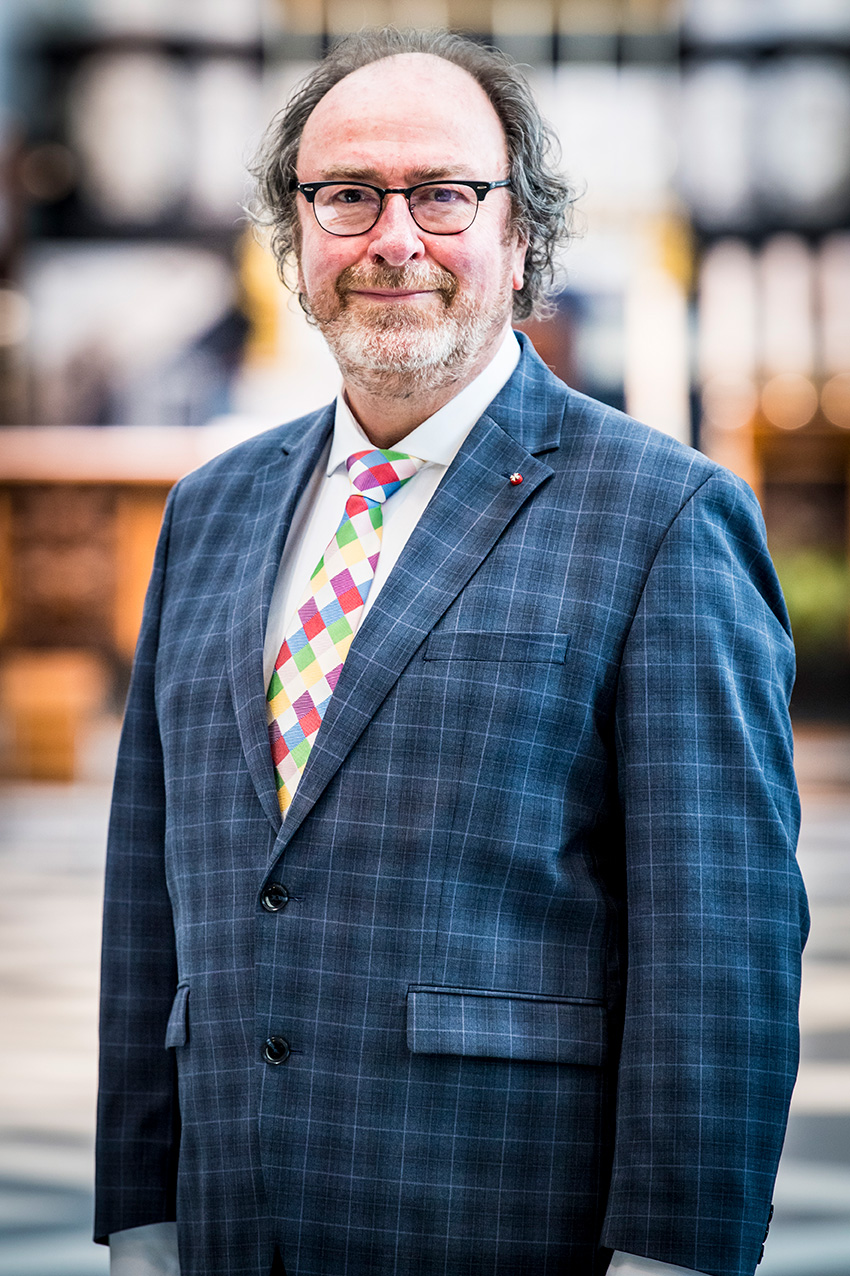 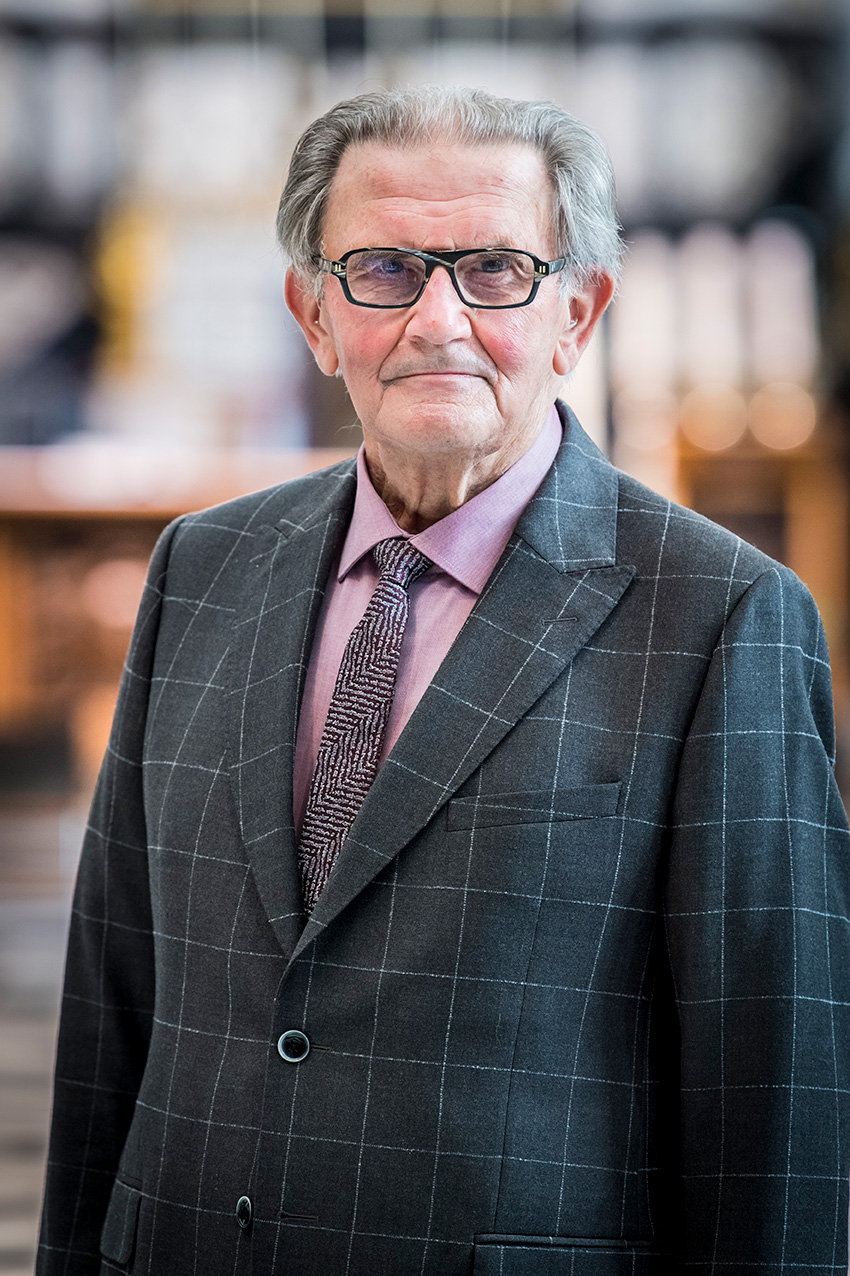 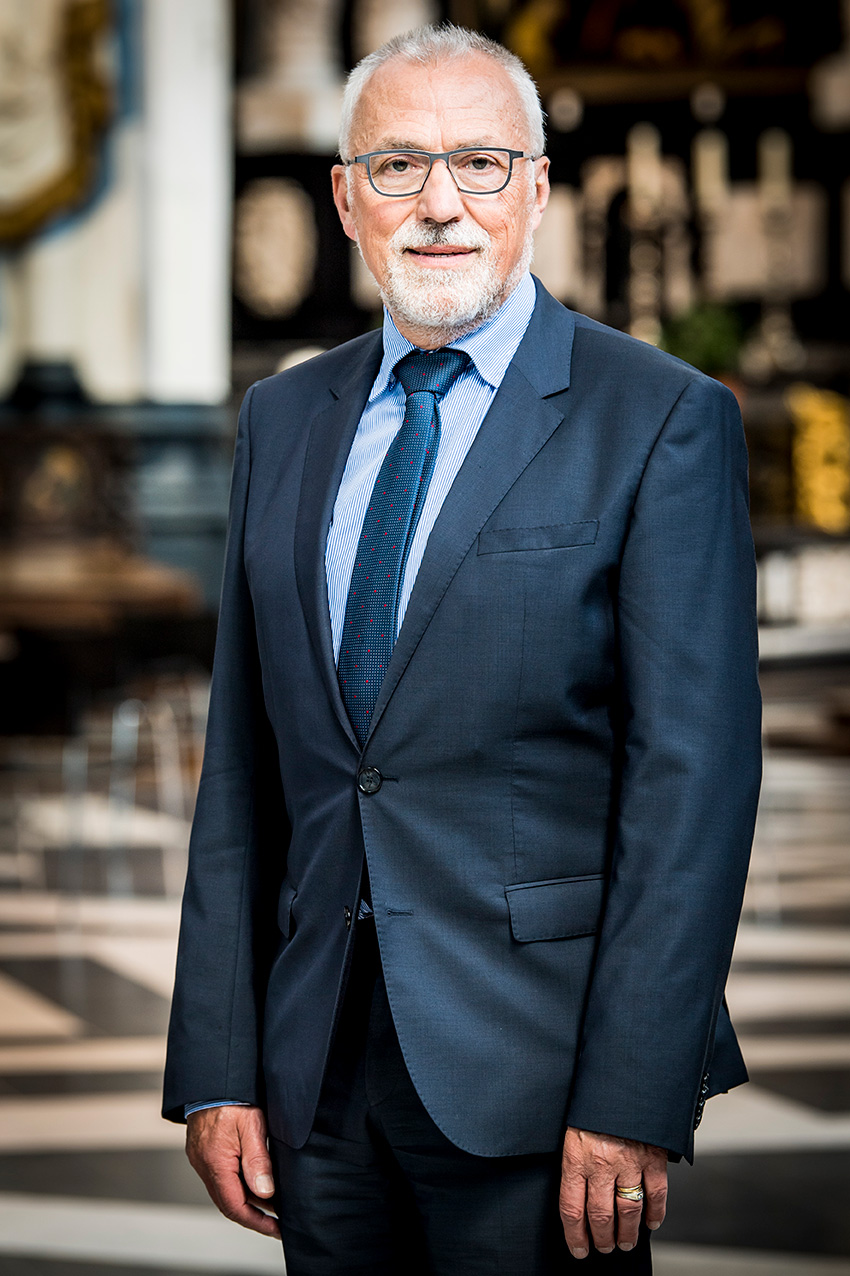